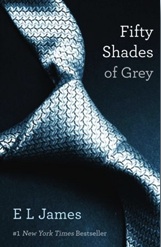 “Children are being neglected all over the country,” volunteered the young woman on the playground bench adjacent to mine. Her head nodded towards the book in my hand, Fifty Shades Darker, sequel to Fifty Shades of Grey.

“I read all three, practically in one sitting,” she admitted.

We agreed there was something about Christian Grey, the antagonist/protagonist of the E L James’ best-selling trilogy, beginning with Fifty Shades of Grey. He’s the best fantasy-man since Edward Cullen from the Twilight series.

Some complained that Christian was too perfect (fit, handsome, rich, pilot, yachter, classical pianist) but I would hardly call a guy with his self-esteem, security and sexual issues, perfect.

Besides, most of us have less-than-perfect men in our lives. We deserve the freedom to include impossibly wonderful men in our summer “beach reads” if we choose! Folks, that’s why it’s called fantasy!

I may not have bothered, but my book club was curious and chose it for our September discussion.

I was alarmed to read online some of my friends’ negative comments and two book club colleagues’ admission that they had abandoned it.

I don’t abandon books with abandon so this was very concerning to me.

But one of the reasons I’m in a book club is to be exposed to new ideas and a variety of books, some I like; some I don’t; some they like; some they don’t. I determined to give the book a chance.

One fine day, on an Adirondack chair on my sister-in-law’s dock with a big blue sky overhead, I read it. The water was gently slapping the rocks. I heard the distant hum of the boat dragging the tube of shrieking children like so many shivering fish on a string. The sun was warm and comforting. Frankly, I didn’t care what I was reading; I enjoyed the moment.

And I liked the book.

In fact, I was interested enough to buy the second book. However, by the end of book two, I had satisfied my curiosity and felt no compulsion to read the third.

I know it was just a step up from a Harlequin Romance. It wasn’t particularly well written; lots of repetition; very little compelling language.

It was contrived from the get-go: the names, Anastasia Steele and Christian Grey. Yet I liked that they addressed each other as Mr. Grey and Ms. Steele throughout their relationship. It gave the book a rhythmic quality.

I was often annoyed with Anastasia, but I typically am with romance protagonists. Their silly choices and their constant self-doubt frustrate me. I want to shake them when they give life-and-death weight to insignificant decisions. It bugs me when they take stupid chances or worse yet, fail to spread their wings and live their dreams. So Anastasia felt to me like any romance novel woman. It’s why I rarely read that genre.

I’m glad I read Fifty Shades of Grey mostly so I understand the pop culture references that are sure to come of this summer’s hot read.

People ARE reading these books. They’re talking about them. I heard today at book club that the author, E L James is in the same financial league as JK Rowling of Harry Potter fame.

I find it quite delicious that a woman can make up this impossible fantasy, describe it not very well and walk away with Fifty Shades of GREEN!

I wonder if she has her own Playroom.

2 thoughts on “Fifty Shades of Grey”