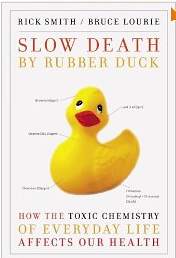 By Rick Smith and Bruce Lourie

This book by Canadian authors examines the alarming invasion of man-made chemicals into every corner of our world including our bodies.

The authors conducted experiments by exposing themselves to a range of toxic substances including mercury, phthalates, non-stick cookware, fire retardants and BPA. They took blood and urine samples before, during and after their exposures and those specimens were measured by a laboratory and analyzed by various experts.

The results were alarming. One of the authors ate tuna for lunch and dinner for two days and tripled the amount of mercury in his blood. There are no safe levels of mercury. It causes various severe health conditions including dementia and death. Mercury is found in many household objects like fluorescent light bulbs, batteries and light switches.

They explain the hazards of several chemicals in easily understood language and reveal the many products that contain questionable substances. For example, phthalates have a hormonal effect on our bodies and are suspected to cause early-onset puberty and reproductive system cancers like breast and prostate. Phthalates are everywhere, from shampoos, soaps and cosmetics to dish soap, air fresheners and laundry detergents. They’re almost impossible to avoid but the authors recommend scrutinizing labels and avoiding anything containing “parfum” or “fragrance”.

They examined the proliferation of triclosan, the ingredient that makes things “anti-bacterial”. Triclosan is a known carcinogen yet it’s found in toothpaste, food packaging, and products meant for children, just to name a few surprising places. There is little evidence that triclosan disinfects any better than plain soap and water.

One of the motivations for this experiment was their knowledge that children are more adversely affected by these chemicals than adults; even more frightening, they provided evidence that a fetus’s children’s children can be affected by its exposure to toxins in the womb. The enormity of the problem is magnified by the knowledge that new-born babies have over 80 toxic chemicals in their blood at birth. Toxic exposure is seemingly unavoidable!

Smith and Lourie reveal some shocking statistics. In 2007, the US EPA reported that 4.1 billion pounds of 650 toxic chemicals were disposed of or released into the American environment. Ten times that amount were produced or brought into the US each day, chemicals that are used in consumer products and industrial processes.

In the US 82,000 chemicals are in use, with over 700 new ones added each year. Only 650 of those are monitored; only 200 have been tested for toxicity and only five have been banned.

The authors incriminate governments, organizations and companies but they also give reason for hope. They demonstrate how consumers can influence companies and governments.  The online community has already made a difference, specifically in the case of the Canadian government declaring that BPA is a dangerous substance and leading the world in regulating it in products like baby bottles.

The authors provide a comprehensive list of further reading and numerous web sites for more information and to join the discussion.  They include sites with lists of “less-toxic” products (www.LessToxicGuide.ca), a toxicology encyclopedia (www.toxipedia.org) and organizations with their fingers on the pulse of this issue like www.environmentalhealthnews.org.   The authors’ own web address is www.SlowDeathbyRubberDuck.com.

I highly recommend this book to anyone interested in their general health and the well-being of our planet.

I urge you to inform yourself on this environmental disaster occurring within our own homes and bodies and make changes to protect yourself and your children.

Even small changes can make a difference.  By making different consumer choices, buying fewer chemical-laden products, we send a message in the one language that companies understand: money.