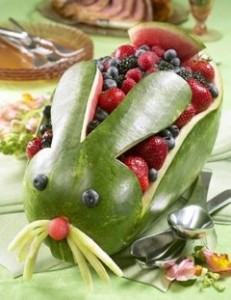 This Easter my Grandtoys (grandchildren) reached a milestone.

A bit of sleuthing by my eight-year-old granddaughter, J____ revealed Mommy is the Easter Bunny.

It seems the receipt for the candy Mommy bought caused some curiosity, especially when she snatched it from J____’s hand and forbade her to read it.

The night before Easter my daughter had wondered out loud to her friends how long she must keep up the pretense of the Easter Bunny, since her kids are eight and eleven, long past when most kids’ faith has been altered.

When the bunny was out of the bag, she was worried about the repercussions on the fragile psyche of her kids. J___ simply said, “You’ve been going to all this trouble for us? Thank you, Mommy!” Hug.

No tears. No anguish. Just raw appreciation for the efforts Mommy made to bring fun and joy to her children.

“I guess this means you’re Santa too.”

No drama there, either.

My nephew was seven when his sister was born. My sister, his mom warned him when he figured out the truth. “You will not spoil your sister’s fun. As long as you comply, Santa will leave you gifts too.” Worked like a charm!

Magic and make-believe are vital components of a great childhood. But things change. We grow up. We must face the realities of life. We have to put away childish games and thoughts.

Does that mean we abandon magic? Absolutely not!

As adults we get to MAKE magic. We stretch our budgets to give gifts, which we often give anonymously or on behalf of a make-believe being. We pretend to be someone else simply to bring a smile to a child’s face. As adults we have the power to bring magic into the lives of people around us. We get to be angels.

If you’ve ever seen the shining eyes of a child who has been touched by magic, you know how precious it is.

While receiving magic is wonderful, the true joy is in giving magic. Ask any grandparent.

PS: What do you call a rabbit whose field is anesthesiology?

A few weeks ago my eight-year-old grandtoy, J___ proudly announced that Premier Alison Redford had lunch with her class.  Redford was doing PR for the new schools recently announced.

I imagine J___ whispering in Alison’s ear, redhead to redhead, “You know, we all have to follow the rules. When you break the rules it’s just not fair to others.”

I like to imagine J___’s words of wisdom prompting the premier to repay that $45,000 reputedly spent on attending Mandela’s funeral. Perhaps she needed to be there. Regardless, it does seem excessive.

This week I teased J___ that all was well in the Province of Alberta until our premier spent time with her class. Now everything’s awry.

J___ vaguely understands my teasing but has no clue about the impact Alison Redford’s abrupt resignation will have on the province.

My opinion of Alison Redford is irrelevant now. She will go down in history as Alberta’s first female premier. Frankly, I can’t recall anything else for which she could be remembered.

Oh, there is one thing: I am dismayed that we’ve returned to deficit spending, after years of sacrificing to balance the budget. Sorry, Alison; that’s what I remember.

Strangely, a number have people have asked me about my political aspirations this past week. I guess “women in politics” is on their minds.

Part of me is tempted because I would love to make a difference in the world, fix problems, apply common sense to government.

But much like the happily-ever-after-marriage fairytale, I have little faith in politicians’ ability to do what’s right for us and it has almost nothing to do with their will.

Our systems of government are flawed, far from fair (or democratic) and conducive to sucking the very souls out of their participants.

Look at pictures of past presidents and prime ministers. After eight years in office, they’ve aged 20 years!

This is not a coincidence.

Politics is a nasty job. I know. I once worked for a Member of Parliament. He was a wonderful man with the highest of ideals but the system and his own friends’ betrayal severely hurt him. I learned that bureaucrats have more power than politicians. I also learned to never trust the media, but that’s another story.

The most altruistic individual can go to Ottawa or Washington, or wherever the “capital” is, and be sucked into the vortex of toe-ing the party line or pleasing the lobbyists, with no heed to the will of the electorate. The crooked seem to thrive; the upright struggle.

Then there are the games, some of which are legislated. For example: years of Senate crap! We know it sucks money. We know it’s ineffective. We know it’s not fair. But the games prohibit us from fixing it.

People often lament the lack of women in politics.

I say, most women I know are too smart to want a job in politics!

The hours are long. In Canada, the travel can be arduous. You read endless boring documents (if you’re doing your job) and attend endless committee meetings. You have enemies everywhere: opposition, journalists, in-party saboteurs. One slip of the tongue can finish your political career. You must play games but no rulebooks are procured nor are there referees.

You’re under constant scrutiny, especially if you are a woman. In fact a woman in politics must be immaculately dressed and groomed to command respect, whereas Ralph Klein was endeared for his rumpled bowling ball look!

My skin’s not thick enough for me to be in politics. I am far too sensitive. I know it’s not about me but I would be hurt. I know that I work best in an atmosphere of collaboration. A building with a section for the “official opposition”, to me, screams of impotence.

Worst of all you can’t ever please your constituents. Half will revile you for supporting something; the other half for not supporting it. You can’t win.

That is why there aren’t more women in politics.

I also believe that it’s easier to change the world outside of politics. The best change is bottom up. It starts in the hearts and minds of individuals. They get inspired to inspire others and then the people demand change.

I read a book about the history of champagne this week. It struck me that the many French revolts that brought positive change in the long run were started at the bottom. The politicians at the top were powerless to stop the ensuing tsunami.

I don’t blame Alison Redford for leaving her job. Reports are she didn’t have the support of her party.  She hasn’t seemed to be having loads of fun: barking and bullying accusations abound, sure signs of unhappiness.

Regardless of our job level, most of us get to a place at some time, where we’re no longer having any fun. The dirty parts of the job are not sufficiently balanced with perks.

I suspect giving back $45,000 could severely skew one’s perspective of fun.

Good-bye, Alison. Our family will remember you as the red-haired first female Premier of Alberta who had lunch with J___ and then ran away.