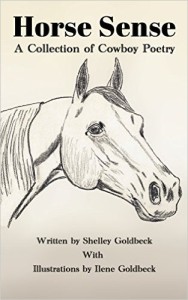 My regular readers may recall that I have recently taken up a new interest: writing and performing Cowboy Poetry.

I am delighted to announce that my first book of Cowboy Poetry, (so far), Horse Sense is now available online at Amazon:

Horse Sense is a collection of the poetry I wrote in 2015. It’s based on my experiences, growing up with horses on a farm, and the experiences of my friends who live and make a living in the country.

I am so pleased that my mother, Ilene Goldbeck contributed her private horse sketches for the book. The tribute poem I wrote for her 75th birthday is included in the book.

In Horse Sense, you’ll find stories that will resonate with you, especially if you grew up in the country. I chose to print the book in large font so my audience and I might not need our reading glasses! It’s a short book, but the point of poetry is to be succinct!

I invite you to read Horse Sense. Hopefully it will inspire you to attend a Cowboy Poetry Gathering.

The Cowboy Poetry community is full of interesting characters, some of whom remember farming and ranching before its domination by corporate conglomerates. Some still practice the old ways, growing our food and collecting and telling stories along the way.

Music is a major part of the Gatherings, mostly the real, old western, story-telling songs. Some performers bridge the gap between the classic oldies and newer music that has the same integrity. Not generally stuff you hear on the radio anymore.

Visit www.AlbertaCowboyPoetry.com to learn more about a gathering near you.

I’m off to Elko Nevada for the largest Cowboy Poetry Gathering in the USA. I will report on the activities in the next issue of the ACPA Barbwire Dispatch. December’s edition is linked here for your viewing pleasure. Happy Trails! 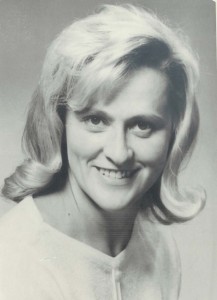 Ilene Goldbeck
In her 20’s

My mother’s 75th birthday was in August. And like most farm wives she has made her share of sacrifices to keep the farm going. I hope you’ll enjoy this little tribute. Here’s to you, Mom

Just how appropriate her name is when I think about our family.

She has quietly supported Dad since she was only seventeen

And his life and ours just wouldn’t be the same without Ilene.

When she married she was 90 pounds soaking wet

But wiry and strong; you ain’t seen nothing yet!

She’s not much bigger now but she can still toss

Forty or fifty bales that weigh nearly as much as she does.

A penny was never stretched like a penny in the hands of Mom.

As little as came through her hands, she always saved some.

My mom reveals her secret stash and saves the farm from its plight.

For many years she had a full-time job in town at the bank.

Never seemed to faze her, even when she did them all alone.

Her garden and her chickens helped keep the wolf from the door.

She’s worked beside Dad and not desired much more

Than being his partner, with a horse or two in the yard.

I challenge you to find a woman half her age who can work half as hard.

She keeps her health in check; she doesn’t need to take pills

But she faithfully ensures Dad takes his to ward off all his ills.

She silently consents when he conjures brand new schemes

And participates completely in the fulfillment of their dreams.

Despite the trials and burdens of walking with Dad along the miles.

She would say her life’s been happy though she’s never had much nice stuff.

Having horses in common with Dad, to her, has always been enough.

Last week I alluded to my Toastmasters speech project on the oil sands. A reader suggested I post it for all to see, so here it is.

Intro: Shelley Goldbeck, has been grilled by the press for her company’s involvement in oil sands projects.  She will now give a statement which will be followed by a short Q&A.

1.  I contend that the mainstream attitude about the Oil Sands is skewed. Rather than viewing the development of the oil sands as an environmental disaster, I suggest we define the Oil Sands as Mother Nature’s mistake, her oil spill, asleep at the wheel, so to speak.  Oops!

With this in mind, we are no longer “mining” the Oil Sands; we are simply cleaning up the environment, restoring the area to its “natural” state.  After all, it’s not natural to have oil-soaked sand.   Restore indigenous flora and fauna. Stop the seepage of oil into the Athabaska River and ultimately the Arctic Ocean.

In short, it is irresponsible not to mop up the mess!

We have the knowledge and the ability to mitigate the environmental impact of this major oil spill.  My company employs a number of professionals in a wide variety of sciences including soil, groundwater, air, noise, vegetation, fisheries, wildlife, archaeology, traditional knowledge, and more, all in an effort to reduce the impact of this natural disaster.

2. Oil is currency.  Like it or not, our economy is driven by oil.  Rather than turn our backs on this opportunity I suggest we make the most if it.  Let’s invest in research for alternatives now so when the faucet turns off we’re not caught with our pants down.  We need to invest more of our oil profits as opposed to the usual drunken sailor spending, typical of pirates… er …politicians.  Norway has a huge nest egg while our sorry Heritage Trust Fund has been raped and pillaged so often she is a mere shadow of what she could be.

3. The Oils Sands are often vilified because of their potential impact on Global Warming.  A few years ago my husband and I purchased a home in Arizona because global warming wasn’t coming to Calgary soon enough for us!

I recall learning in Grade Three Science that oil was formed by decaying tropical rain forests and inland seas that once covered what is now Alberta.

If that is true, who says the current climate of Alberta is normal?  I like to think we’ve been in a below average blip for millennia and we are gradually climbing back to a normal, more tropical climate. Plus today’s tropical rainforest is the oil of a million years from now, though likely by then oil will be obsolete, primitive, or frowned upon, like shooting up heroin in a church. Therefore we owe it to future generations to burn fossil fuels, warming the planet, nurturing tropical rainforests, to die and decay and be squeezed into oil in case they are no more advanced than we are.

Ladies and gentlemen, I urge you to support the efforts to clean up the gigantic oil spill we affectionately call the Oil Sands.  Whether it’s true or not there is no harm in assuming peak oil has come and gone; let’s not leave our grandchildren freezing in the dark.  Let’s think outside the oil barrel and develop alternatives with even a fraction of the proceeds and invest more of the profits for future generations. We have knowledge, skills and technologies to reduce our footprint; let’s use these to develop the Oil Sands sustainably.

At this time I invite you to ask questions.

1. Question: What do you think about the Oil Sands protests?

Hypocrisy should be one of the seven deadly sins!  Ha! But seriously, every single person protesting the oil sands uses petroleum products daily: in their food, clothing, housing, transportation, medicine, their X-boxes, iPods, iPads, and computers. The helicopters they fly over the oil spill are powered by petroleum and are largely manufactured using petroleum products, as are their cameras. For better or worse, every single thing we see, hear, touch, taste, and smell is connected to oil.

I believe we need to find alternatives to this finite resource but abandoning it before developing alternatives to at least SOME of its uses is pure folly. We need to conserve. We must be mindful of the environment and harvest this resource, being careful to do as little harm as possible.

Vilifying Canada’s Oil Sands is not the answer.

2.  Question:  There have been news reports that Quebec is embarrassed by the Oil Sands, like the wayward sister who’s shacked up with a guy half her age.  What do you have to say about that?

Like other Canadians the residents of Quebec use petroleum products daily and enjoy many benefits because of Alberta oil, like the lowest university tuition in the country and virtually free daycare.  My daughter spent $40,000 in the last four years for child care so she could keep her job to feed her children. If she lived in Quebec she would have paid less than $9000.  To continue with your analogy, Quebec is essentially living off the avails of prostitution.

Thank you for your questions.