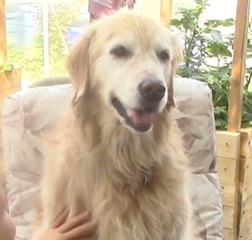 Old Dog Vestibular Disease. Ever heard of it? Me neither.

I suppose it’s because few dogs get really old. Our vet said at our last check-up that she rarely sees Golden Retrievers older than ten or twelve years old.

A few days ago she suddenly turned into a mad cow. You’ve seen the images of those poor creatures stumbling and bobbing their heads. That’s what Divot looked like and it was heart-wrenching.

She had a good walk in the morning. In the afternoon Hubby pulled a slice of roast beef from the fridge. Her usual reaction would be to dash over and hope that a crumb would drop or Hubby would save a scrap for her. (He always does!)

We left her, thinking it a temporary numbness, perhaps like when you lie on one side and your arm “falls asleep”.

Suppertime rolled around and she refused to get up. We helped her. She attempted to walk the five feet to her food dish.

It was then that she looked like the mad cow. The way she gingerly picked at her food like her mouth was frozen convinced me she had had a stroke.

The looming ugly decision tormented me. I knew the day would come. But I’m not ready to let go.

Next morning, at book club, the host made the mistake of asking me how I am and I couldn’t keep it together. Good thing: every member of my “tribe” hugged me and commiserated and told me of her own experiences losing her best “furiends”. That made it better.

One told me not to grieve yet, but to love Divot until the end. Then grieve. She said it could be my gift to Divot. I liked that.

So I cheered up and resolved to investigate Divot’s sudden ailment. That’s when I learned about Old Dog or Geriatric Vestibular Disease.

Vestibular refers to a nerve that connects the ear and the brain. It can be inflamed but there is no definitive cause for the condition.

The symptoms seem stroke-like. They include, a cocked head, instability in walking, tending to veer to one side, affecting appetite (hard to eat when you’re dizzy!)

I learned that pet owners often hastily euthanize, believing the dog has had a stroke, when the dog can recover from Old Dog Vestibular Disease.

Divot didn’t seem to have the severe effects of stroke, which are the same as Vestibular Disease, but can also include blindness and permanent paralysis. Apparently strokes are rare in dogs.

After a few days, we visited the vet. Amazingly, Divot was considerably better that morning. She still wobbled but she seemed more stable. By the time we got to the clinic she was walking only slightly off-kilter. The vet marveled. She said three days was very fast to show such recovery; it can take weeks.

The vet said we can expect Divot to recover except for having a cocked head, a perpetually inquisitive stance, which does add to her charm.

The vet also suggested that many people do MRI but in her opinion it wouldn’t benefit Divot. We appreciated that. 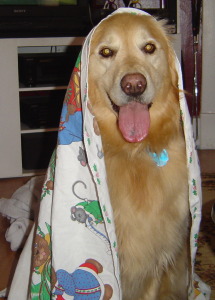 Divot LOVES her walks more than anything. I know that not walking would surely hasten the aging process. I was relieved when the vet agreed short walks are fine.

We took a stroll that afternoon. Divot wobbled only a few times in three blocks. She had a good snow bath (rolling with glee on a patch of snow) and even trotted a couple times.

It seems she is recovering. We will have to face the ugly decision one day, but not today.

I am more determined to cherish each moment and fully drink in the splendor of our walks together so she will never really be gone.

Health Lessons from an Old Dog

Last week our Golden Retriever, Divot, turned 14 and she had a wild and crazy birthday.

It began with a lunchtime party with the Grandtoys, who simply love to have dog parties. I barbecued chicken legs. The wind blew the aluminum foil cover off the pan and Divot gobbled down a chunk of the chicken-skin-flavoured foil before I could stop her.

Peanut butter on rice cakes is her usual birthday fare but this year it was leftover blueberry pancakes with peanut butter. And my Grandtoy had put so much peanut butter on the pancake it stuck to the roof of Divot’s mouth. So funny as she struggled to suck it off! See video of Divot’s party. https://www.youtube.com/watch?v=FSPwqV3D8V8&feature=youtu.be

Finally, Divot and my husband went to see an old friend, Betty, who fed Divot most of a bag of popcorn. Later while hubby was sitting at the table with Betty he heard a slurping sound from the living room. There he found Divot’s nose in a box of chocolates. He dug some out of her mouth and deduced she may have swallowed one or two. Not the end of the world.

As you can see Divot still behaves like a puppy. She has slowed down in some ways: our walks are often strolls. She can no longer jump into the truck; in fact, she can’t even put her paws up to boost herself. She sleeps most of the day.

But the tiniest sign that we’re ready to walk: I brush my teeth, get my phone, ensure I have my Epi-Pen, put on my shoes, any one of those signs gets her excited about our walk. She bounds off the back porch like a puppy. Divot loves people and is happy to greet others as we walk around our neighbourhood, canines less enthusiastically than humans. Her pace going is faster than coming home, something she’s always done, anything to prolong the walk.

We are privileged to have Divot in our lives for 14 healthy years.  Divot is our living experiment. When she was ten weeks old we decided to feed her a diet that was more in keeping with her nature. As a descendent of wolves, we knew she would thrive on a wolf-like diet. 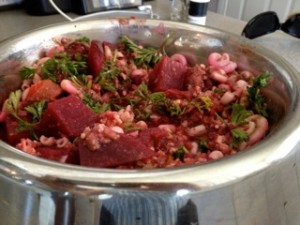 Since then she has eaten almost all raw food. Her typical meal consists of ½ cup raw meat, ½ cup cooked brown rice, ½ cup raw veggies like carrot or cucumber. She gets garlic and parsley; she gets fish, olive and coconut oils and some other supplements. An integral part of her diet is the raw beef soup bones she has two or three times each week. They keep her mouth healthy and her teeth cleaned. She has all her teeth and they’re not black, as is expected by this age.

Despite losing most of her hearing and some of her sight, Divot has had few health issues. Apart from some antibiotics for ear infections from swimming in the Bow River, she has taken no medications. At two years old we removed a large wart from her paw. No diabetes, epilepsy or other modern dog ailments. She is not obese and she has never stunk, like most dogs do.

Divot has lived two years longer, so far, than the long range for her breed. We think it’s her diet and lifestyle. If it works for a dog, it should work for humans.

So here is what I recommend based on Divot’s fine example. Eat whole, real food, suitable to your species as much as possible. Not too much. Drink plenty of water. Exercise everyday. Sleep lots. Play whenever you can. Surround yourself with people you love and choose to be happy.

If Divot were a human she’d be pushing 100. And I’ve just shared the secrets to her longevity!